The school holiday has begun and it’s time for fun, fun, fun! Whether you are enjoying a staycation at home in Johannesburg or are here visiting family or friends, here are a few ideas on what to with your children over the Easter holidays.

This 55ha zoo in the heart of Johannesburg has been a roaring success since it was opened in 1904. There are more than 320 species of animals and reptiles in this internationally acclaimed oasis in the city.

Wander among animals from near and far, find a shady spot and have a picnic while the kids run around in the sun or catch a guided tour on one of the large open-air vehicles. You can even camp overnight, but you do have to book for a group of more than 25.

See these beautiful lions at the zoo. (Image: Johannesburg Zoo)

The office tower, which stands 223m tall, houses Transnet’s head office and it’s not surprising that the views from its top floor are probably the best you’ll see of the city.

How to get there: hop on the Johannesburg City Tour and hop off at stop 11 at the Carlton Centre. 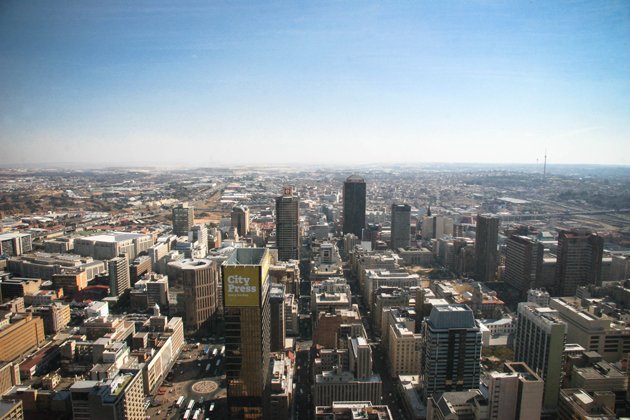 A room with a view! See Johannesburg from a new angle from the top of the Carlton Centre. (Image: City Sightseeing)

With more than 350 interactive maths, science and technology exhibits, the Sci-Bono Discovery Centre is the largest and most visited science centre in Southern Africa. Wander the halls, watching your kids learning science.

This is one place your children don’t need to keep their hands behind their backs; they are actively encouraged to touch, press, push and play, all in the name of science.

How to get there: hop on the Johannesburg City Tour to the SAB World of Beer, Sci-Bono is just across the road.

Have a huge amount of fun while catching a bit of history at Johannesburg’s amusement park, just 8km from the old city centre. Located on a gold mine that closed in 1971, the park is themed around the 1886 gold rush that gave birth to the city. Catch water rides, roller coasters or the Tower of Terror.

There are lots of places to have lunch, and everyone can catch a spot of history at the museum. All of this is within walking distance of the world-famous Apartheid Museum, so those with older kids or teens could make a day of it and do them both.

How to get there: hop on the Johannesburg City Tour and hop off at Gold Reef City Casino Hotel.

When looking at the James Hall Museum of Transport in Johannesburg's Pioneer Park from the outside, one can't imagine the treasure trove of vehicles and displays, covering more than a hundred years of land transport in all its forms, hidden behind the walls.

The James Hall Museum of Transport in Johannesburg is the largest and most comprehensive museum of land transport in South Africa. It is the perfect place to see how our grandparents and great-grandparents got around the city – and the country.

You'll get to see a variety of vehicles, including animal-drawn vehicles dating back as far as 1870, bicycles, motorcycles, buses, trams, fire engines and motor cars.

How to get there: hop on the Johannesburg City Tour and hop off at stop 12 to enjoy the James Hall Transport Museum.

See vehicles dating back as far as 1870 at the James Hall Transport Museum. (Image: City Sightseeing)

Hopping on the red bus is the best way to see Johannesburg. Hop on and off the open-top bus and explore Johannesburg's top sights and attractions with us.

We also offer City Sightseeing ticket holders in Johannesburg a free shuttle service from departure points at certain hotels in Sandton and Melrose to our ticket office in Rosebank at STOP 1, making the red bus even more accessible than before for tourists, business travellers and locals alike.